According to the literature, autonomic neuropathy or symptoms of DAN can also occur in patients that are not diabetic. This condition is generally referred to as ‘advanced autonomic neuropathy’. In the cases with the absence of diabetes, the risk of adverse events and mortality are also present.  Regardless of the pathology of the autonomic neuropathy, the disease is known to be treatable. For more details, refer to Neuropathy is Treatable – A. Vinik M.D.

It is well established that early stages of autonomic dysfunction present more treatment options for patients than patients with advanced autonomic neuropathy, DAN or CAN.  Detection of the onset of such advanced conditions through autonomic nervous system (ANS) testing is proven to prolong or avoid the onset or advancement with the presence of such chronic diseases.

Treatment for autonomic dysfunction / neuropathy is based on maintaining balance (homeostasis) between the two branches of the autonomic nervous system – the sympathetic & parasympathetic systems. The parasympathetic and the sympathetic activity can significantly adjust their input to maintain homeostasis even with the presence of chronic disease or organ dysfunction. It is known in these chronic cases that the input from each brand of the ANS system results in autonomic imbalance which can further affect other organs such as the cardiovascular system.  By the time symptoms are present in chronic disease, the autonomic nervous system has been out of balance for a long time.

With the basis of maintain balance to prolong complications of chronic diseases such as diabetes and cardiovascular disease, autonomic balance (sympathovagal balance) is recommended.  Some of the possible therapeutic agents to assist are listed in the table below. 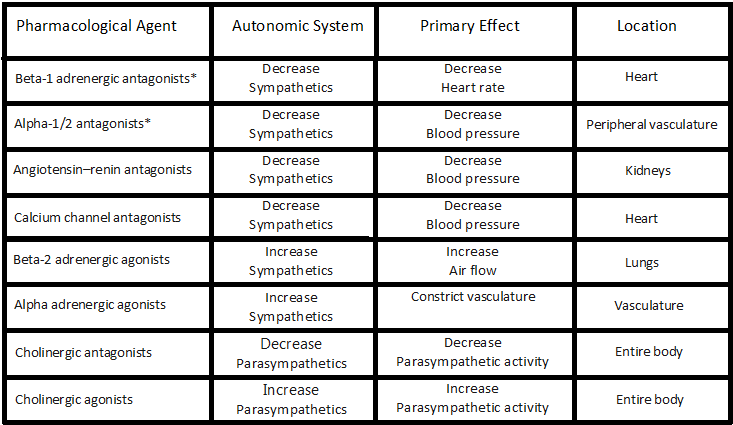